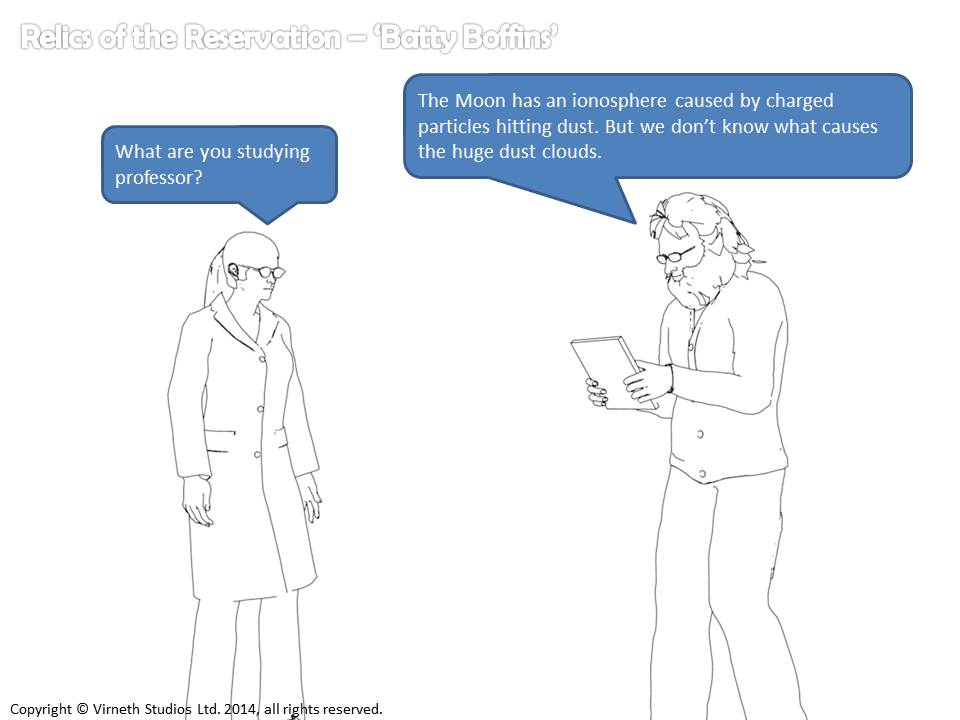 Moon Dust is caused by the weathering of the lunar rocks over a significant period of time. Meteorite impact and solar radiation cause the rocks to fracture and crumble into smaller and smaller fragments to create huge dust bowls on the surface of the Moon, that rival even the best efforts of the American mid-west farmers of the early 20th century. The dust is thought to be repelled from the surface by particles ionized by radiation from the sun. The dust can travel anywhere from a few meters to kilometers into the atmosphere, where it falls again under the influence of gravity. This gives the Moon a thin but tangible atmosphere. Radiation from the Sun hits this atmospheric dust, ionizing it and thereby creating an ionosphere.

There have been confirmed sightings of colour events on the Moon. These are thought to be caused by surface material or surface gasses being excited by solar radiation and emitting red coloured light, or by gasses escaping from beneath the surface of the Moon.

Moon dust has been brought back to Earth by the Apollo missions. The dust has been studied to evaluate its mechanical properties for use in construction on the Moon. It is also being studied to identify possible problems it might create if a colony is established on the Moon; it may erode seals and building materials, it may contaminate the air the colonists breath and it may coat the buildings and affect their heat absorption rates causing the buildings to warm up to an unacceptable level for instance.